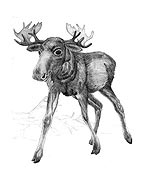 Alces alces: model of expected distribution in 2050 by GLM (forced by climate) .

There is current potential distribution example. (Note: for the lagre mammal besides climate options spacious habitats presence are very important, so even in 50×50 km pixel elk can be absent even if climate is acceptable).

Additionally, supported populations of elk can be found in Ukraine, which do not reflect natural distribution and were not included into themodel. 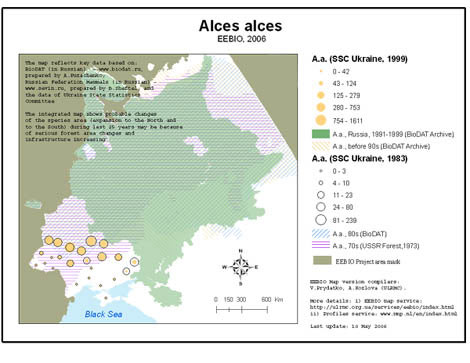 The map reflects key data based on: BioDAT (in Russian) – here (by A. Puzachenko); Russian Federation Mammals (in Russian) – here (by B.Sheftel); and the data of Ukraine State Statistics Committee The integrated map shows probable changes of the species area i.e. expansion to the North and to the South) during last 25 years may be bacause of serious forest area changes and infrasrtucture increasing. Alces alces climate envelope building (continuing) in the framework of the Species-climate-change project. Ther animated example documented areal cahanges in the GLOBIO Ukraine Region (1928-2008) is based on: i) historical maps, ii) reconstructed forest coverage of 1928s, iii) remote sensing data of 2000s.   The Step#2 forestall a GLM modelling stage i.e. Step#3. Sources of information for the model: 1) Map of the USSR European Part Vegetation, M1:4, 000, 000, drawn up by Prof. J.Kuznetsov (1928) – in Russian. The map was granted us for scanning by the Vernadsky National Library (Kyiv). Vectorization was processed by V.Prydatko, A.Ischuk, Y.Apetova, A.Kalynychenko (ULRMC). 2) USSR Forest Atlas (1973)/Forest Game Birds and Animals – in Russian, was granted by the Vernadsky National Library (Kyiv); vectorization by V.Prydatko, A.Ischuk, A.Kalynychenko (ULRMC). 3) BioDAT (in Russian) –  by A.Puzachenko; 4) Russian Federation Mammals (in Russian) –  by B.Sheftel; 5) Data of the Ukraine State Statistics Committee; 6) Terra MODIS (2000); 7) ULRMC Data on forested areas in Ukraine in 1990s and 2000s based on Landsat; 8) GSF Index data matched  1970 and in 2007 (Prydatko, pers. inf.); 9) ULRMC algorithm on A.alces habitats modelling. The integrated map shows probable changes of the species area (expansion to the North and South) during the last 80 years because of serious forest area changes (fragmentation), infrastructure and human pressures, and climate change. GIS Map authors: V.Prydatko (ULRMC), G.Kolomytsev (IZ NASU) and A.Kozlova (CASR NASU). More details about previous EEBIO Project and current GLOBIO: i) ULRMC web [it was active by 2016], ii) EEBIO project web-area. 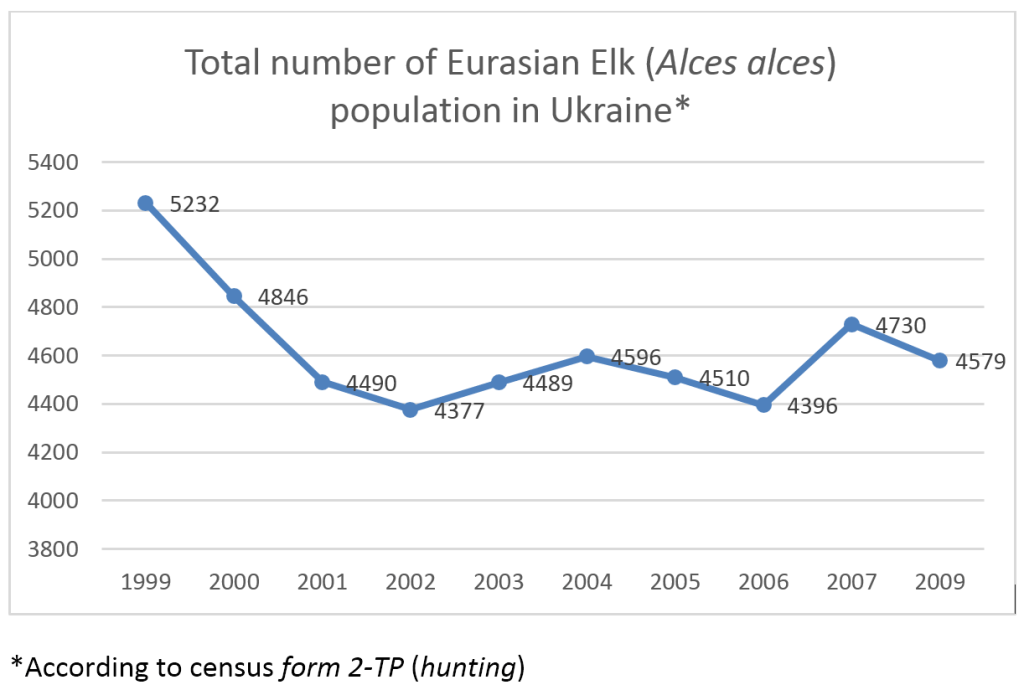 Former logarithmic approximation showed that the species can migrate outside of Ukraine earlier then Elk spatial model was predicted. Current census is not represent such trend. Despite that, it may happen if society will do nothing to improve respective management and sustainability of natural habitats of the animal. Elk SDM predicted that it could be in 2030’s.