Pedunculate Oak (Quercus robur): Climate Change and Cartographical and GLM-distribution Modelling by 2030 and 2050

The table shows a difference: ‘current distribution’ contrary to ‘predicted distribution’ by the model (based on climatу change data i.e. GLM-scenario).

The map shows expected changes in distribution of Q. robur by 2050 due to well known climate changes. Map visualizes a shift of expected potentially-suitable-habitats of the species to the north. The model is based on GLM method and R-statistics. The basic climate change data is derived from an IMAGE model package. The integrated distribution map was compiled with usage of data from local sources of the information as well as the Flora Europaea Atlas map. Map authorы: G.Kolomytsev (IZ NASU), V.Prydatko (ULRMC. Published on: May 12, 2008. Last updated on: May 1, 2009.

The map explains better what digital data was selected by the BioModel Group for further GLM procedures for the purposes of GLOBIO#4 development. Deep-green colour show real forest plots of all types and that is based on ULRMC’s Landsat data of 1998-2000 (Yu.Shtepa, personal inf.) It intersected well all 0.5-km buffers around of 1735 settlements were referred to Q.robur in scope of 2004. (The respective settlements were found automatically with usage of a know-how software ‘GSF” made in ULRMC ). The map proves that the previous publications did not use realistic data about location of the forested areas in Ukraine in 1998-2004, but a virtual data. Map author: V.Prydatko (ULRMC, NAU). Last update: April 21, 2008. 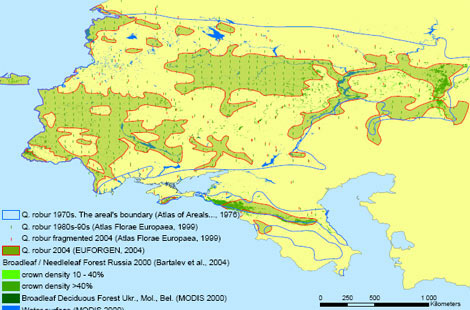 The integrated map (Case-research #3) shows distribution and changes of boundaries of the areal of pedunculate oak (Quercus robur). The tree – Q. robur – is a dominant of forest- formative species in area of broadleaf- and mixed-needleleaf-broadleaf forests in the European part of the former USSR (Sokolov et al. 1977). In the northern part of its areal Q. robur grows in river valleys. In the central part, it forms mixed forests with Picea abies; closer to the south – a belt of broadleaved forests where Q. robur dominates. At the areal’s south boundary it forms small (marginal) forests in ravines and flood-plains (Atlas of Areals and Resources… , 1976). Q. robur belongs to the thermophilic species. The low temperature bound of possible occurrence of oak forests is marked by an average annual of 2?C (http://www.forest.ru – in Russian). Therefore, hypothetically, the oak’s areal boundaries will shift along with the changes in the average annual temperature. For Yearly map of averaged mean annual air temperature (Afonin A., Lipiyaynen K., Tsepelev V., 2005) see http://www.agroatlas.spb.ru Climate. Oak forests are of great importance for the water regime and soil structure, especially on the steep slopes of river valleys and in forest-poor areas. 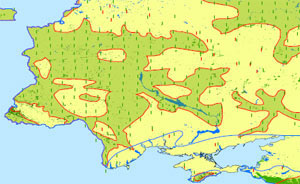 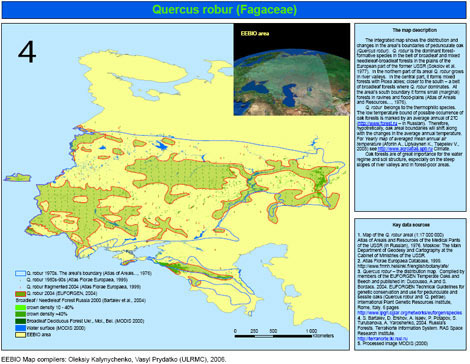