Well known species. Some key sources (EMA, 2007) argues that there are no major threats to the species (the underline is ours). It is considered a pest in parts of its range (Oliver 1993, Battersby 2005)[5]. Tuberculosis may be an issue in some areas, especially in managed populations. The disease does not kill the animals, but it is becoming increasingly prevalent (EMA Workshop 2006)[5]. Occasionally there are outbreaks of swine fever and African swine fever which cause local mortality, but populations recover rapidly (Oliver 1993)[5]. Habitat destruction, hunting (for food and sport), and persecution (often in reprisal for crop damage) may cause local declines in parts of the range (Oliver 1993)[5]. BioModel group found out that in an EEBIO region as well as in GLOBIO Ukraine Region that EMA’s and IUCN’s opinions reflected very common and may be not correct vision. Some Russian language sources have demonstrated expected area of the species in 2005s with inclusion to it territories of Ukraine, Belarus and Moldova (left figure), and that is absolutely distinct to the EMA’s data (right figure): 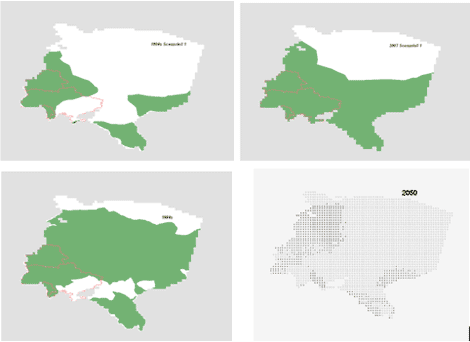 But what is very important: the both demonstrated serious decreasing an northern part of the areal by 2005s i.e. during 25 years (central figure). The source ‘3’ noted in 1995s that ‘the species has settled in a new places i.e to Karelia and near Kama River’. Thus, there is a question: where is predicted areal of the species by 2000s and where it can be in 2050?