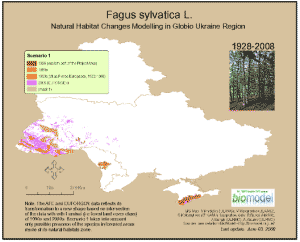 Beech areal changes were modelled with usage of GIS and RS data. GIS and RS data includes following. 1) Map of the USSR European Part Vegetation, M1:4,000, 000, drawn up by Prof. J.Kuznetsov (1928) – in Russian. The map was granted by the Vernadsky National Library (Kyiv) – vectorization made by V.Prydatko, A.Ischuk, Y.Apetova, A.Kalynychenko (ULRMC). 2) Vegetation of European Part of the USSR: Analytical Maps I-IX (Attachments)/Vegetation of European Part of the USSR. S.P., Nauka, 1980.—429 pp, in Russian. 3) Fagus sylvatica/Distribution maps// The European Forest Genetic Resources Programme (EUFORGEN) – http://www.bioversityinternational.org/networks/euforgen/Euf_Distribution_Maps.asp 4) Atlas Florae Europaeae (1972-1996), edited by Jaakko Jalas and Juha Suominen, together with Raino Lampinen (Vol. 11)/Updated 2004-05-26 by Mikko Heikkinen – Website at http://www.fmnh.helsinki.fi/english/botany/afe/ – with our transformation of the data to a buffer zone, which intersected a remote sensing data i.e. ‘5 and ‘6’ sources of the information. 5) Ukraine Forest in 1990s based on Landsat Data (ULRMC, 2005). 6) Ukraine Forest in 2000s based on Landsat Data (ULRMC, 2005). The historical map of 80s was scanned, processed and digitized in ArcGIS by V.Prydatko.

For the first time in GLOBIO Ukraine Region the GIS analysis was used for calculation of total beech coverage based on historical maps and new remote sensing data.- Table 1 (by request). It provs that EUFORGEN spatial data [3] can be mistaken because of abnormal 320% enlargement of expected beech natural habitats coverage in the rergion: it was six times bigger contrary to 30-m-resolution RS data of 2000s i.e. forest coverage.

Scenario 1 takes into account possible presence of the species inside of its natural zones only. The AFE [4] and EUFORGEN [3] data reflects its transformation to a new shape based on intersection of the data with Landsat (i.e forest land cover class) of 1990s and 2000s.

Scenario 2 takes into account possible presence of the species: i) inside of its natural zones, ii) and outside i.e in settlements also (that is based on GSF Index). The AFE [4] and EUFORGEN [4] data reflects its transformation to a new shape based on intersection of the data with Landsat (i.e forest land cover class) of 1990s and 2000s.

The main causes of change are not interpreted definitely, but it can be land use (deciduous forest fragmentation), and possibly climate change. The example is a step to GLM-model.