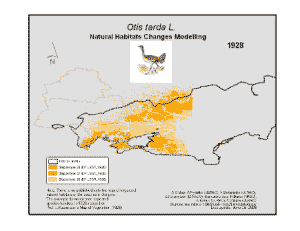 Great Bustard (Otis tarda L.) areal changes were modelled with usage of historical, RS- and GIS data. 1) BioDAT – in Russian, prepared by V.Vinogradov – www.biodat.ru. 2) Key Bird Areas in European Russia (2000) – in Russian. 3) Ukraine Red Data Book (1994) – in Ukrainian. 4) Vegetation of European Part of the USSR: Analytical Maps I-IX (Attachments)/Vegetation of European Part of the USSR. S.P., Nauka, 1980.—429 pp, in Russian. 5) Map of the USSR European Part Vegetation, M1:4,000,000, drawn up by Prof. J.Kuznetsov (1928) – in Russian, vectorization made by V.Prydatko, A.Ischuk, Y.Apetova, A.Kalynychenko (ULRMC), the map was granted by the Vernadsky National Library (Kyiv). 6) Birds of Europe (1994). There is no published detailed map of expected natural habitats of the species (steppe) in East Europe in the past i.e. in 30s, and which our BioModel Group reconstructed in GIS with usage of the source [5].

The integrated animated map shows decreasing and fragmentation of natural habitats of O.tarda inside of Western European steppe zone during last 80 years because of land use change (habitats fragmentation) and possibly climate change. Full story about natural (breeding) habitat changes of the species: